Peter is a sixth-year PhD candidate studying Late Antique religions of the Eastern Mediterranean, pursuing the Graduate Certificate in Digital Humanities. He specializes in Christian monasticism within Syriac-speaking communities. By working across multiple languages including Syriac, Greek, Latin, Hebrew, and Coptic, Peter seeks to understand the exchange and development of religious ideas and practices across the ancient world through the art of translation and the development or religious education centers in the ancient world.

Peter’s dissertation focuses on the process of monastic training in the Christian Church of the East. His goal is to better understand how teachers and students of Mesopotamian monasteries learned how to live the extraordinary life of renunciation demanded of them. By expanding education from purely literary definitions and incorporating physical activities like fasting, labor, and craft as well as spiritual exercises of vigil, demon combat, and meditative prayer, Peter aims to expand on the knowledge of this understudied Christian community. His approach is centered in particular on the realities of daily life gleaned from literary, historical, and legal sources. In addition to his dissertation, Peter is actively pursuing digital and public scholarship opportunities, most recently through the Digital Scholarship and Publishing Studio Summer Fellowship, in which he has worked with Jay Bowen to map the creation, distribution, and transmission of Syriac manuscripts of the late ancient world.

Peter is currently working as a Teaching Assistant for “Politics, Sex, and the Bible” (RELS:2620), but has taught across several disciplines both as a lead instructor and a TA. In Fall 2020, he taught “Banned from the Bible: Pseudepigrapha and Apocrypha” (CLSA/RELS:3247). As a TA at Iowa, he has also taught for “Big Ideas: Information, Society, and Culture” (POLI:1050), “Magic in the Ancient World” (CLSA:1340), “Ancient Medicine” (CLSA:1181), “Medical and Technical Terminology” (CLSA:3750), “Religions in a Global Context” (RELS:1015), “Judaism, Christianity, and Islam” (RELS:1001) and “Medieval Religion and Culture” (RELS:1225). In addition to his work at the University of Iowa, Peter served as a visiting instructor in Philosophy and Religion at Coe College, leading a course on Western Religions (REL:108). Peter has also worked as both a student excavator and staff member on archaeological digs, serving as a member of the GIS and Total Station team for the Lechaion Harbor and Settlement Land Project (LHSLP), and active archaeological dig near Corinth, Greece from 2017-2019 and participating in the Tel Megiddo excavation in Israel in 2014.

Peter holds Master of Arts degrees in Religious Studies and Classics from the University of Iowa. Before coming to the University of Iowa, Peter completed a Master of Theological Studies degree at Vanderbilt University, focusing on monastic life and ascetic thought in Syriac communities. In particular, he studied the reception of the writings of Evagrius of Pontus in dialogues regarding demons and the human mind. His thesis, “Evagrius of Pontus and the Late Antique Demon: Alone Among the Thoughts” earned him the Elliot F. Shepard prize for excellence in Church Historical Studies. Alongside his research, Peter worked first as an Editor and then as a Project Leader on the Syriaca.org Reference Portal under the guidance of Dr. David Michelson, working with XML encoding of Syriac manuscripts. In addition to this, Peter undertook a study of ancient Egyptian history and culture and several courses on the art history of Christianity, Judaism, Egypt, and Greco-Roman religions. Prior to his Master’s work, Peter earned his BA from Coe College with honors in Religious Studies, in addition to completing a Mathematics major and Classical Studies minor. He worked for two years as a high school instructor in Brentwood, Tennessee with Mary Lee Bunch and Associates, an alternative education and tutoring company, where he led courses in history and computer science, in addition to private tutoring. 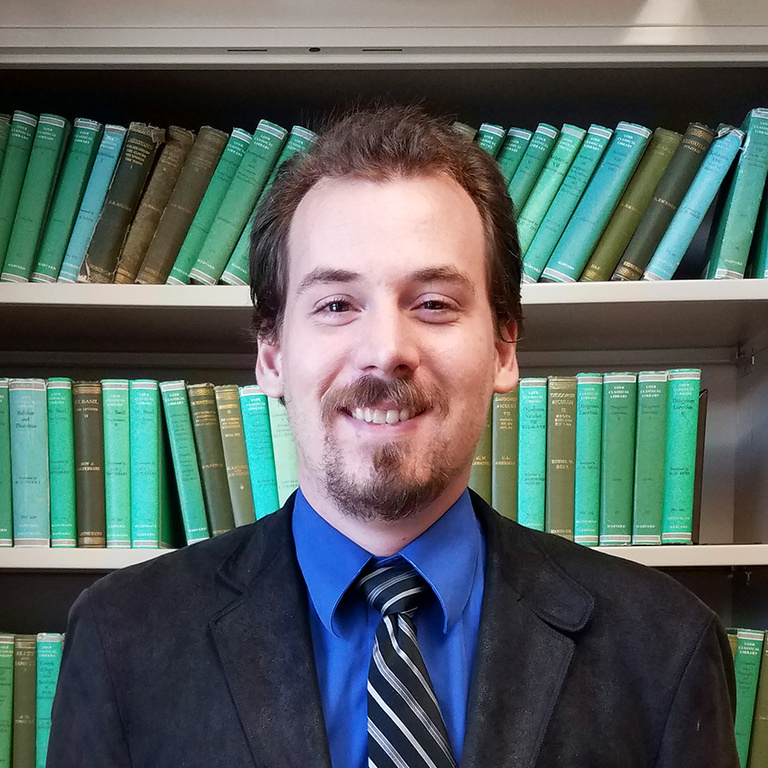